California residential solar and net metering are in jeopardy if the California Public Utilities Commission (CPUC) and Governor Newsom have their way.

Whether you have solar or not, if you live, have a home, or work in California, please read and contact Gov. Newsom as soon as you are able. See below for suggested message to leave for Gov. Newsom. His office number is 916-445-2841. Note: the proposed charges will be retroactive on existing solar users!

The CPUC released their proposed decision on net metering, and it appears that the CPUC has sided with the utilities. This is a terrible proposal and makes no sense when California plans to be carbon neutral by 2045.

The bottom line: If the proposed decision is approved by the CPUC, it will make solar and batteries too expensive for middle and working class people. The CPUC is scheduled to make a final decision on January 27th, 2022. The decision would take effect four months after the vote (May 28th).
This, even after hearing from 120,000 members of the public and over 600 nonprofit organizations, community leaders, affordable housing advocates, faith leaders, elected officials, schools and municipalities.
More analysis to come, but the topline details of the CPUC’s proposed decision are as follows:
1) Highest solar penalty fee in the U.S.
If you put solar panels on your rooftop, you will be charged on average $57 / month on average.
PG&E customers: $48 / month
SCE customers: $60 / month
SDG&E customers: $64 / month

The only other utilities that charge solar penalty fees this high are in Wyoming and Alabama.

2) Massive cut to the credit solar users receive for the extra energy they produce for the community.
Currently, solar users are credited on average twenty-five cents per kilowatt hour for their excess energy. The proposed decision slashes the credit to about five cents per kilowatt hour. This cut would happen right away, with no transition period.

3) These changes will be retroactive on existing solar users. The current 20-year protection for solar users on “NEM1” and “NEM2” will be reduced to 15 years. 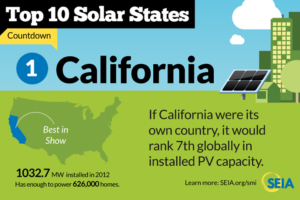 The bottom line: Most middle and working class people will not install solar if these changes go into effect. That would cause the rooftop solar market to significantly contract, putting tens of thousands of jobs on the line.

As expected, the CPUC included items intended to make it seem like they are helping more working class people afford solar. For example, they exempt some low-income people from the solar penalty fee, and also offer a temporary subsidy for ten years (unless you happen to live in SDG&E territory). These items are window-dressing. The CPUC’s “incentive” would only partially offset the other changes, making it on the whole worse for working communities than the status quo.

Groups like CALSSA and Protect Our Communities Foundation and Vote Solar have already laid out how to actually increase solar access in working class communities. The CPUC chose to ignore those substantive proposals.

What we need to do next:
The most important thing is to flood Governor Newsom’s office with calls. His number is 916-445-2841. A sample message could be:

“My name is _____. I live in ______. I am strongly opposed to the rooftop solar proposal released by your Public Utilities Commission. California should not charge people penalty fees for putting solar panels on their rooftop! If you are serious about helping people control their energy bills, avoid blackouts and fight climate change, you need to encourage MORE people to install rooftop solar. Governor Newsom, this is on you. We are watching what you do next. Thank you.”

More analysis will come in the near future along with more resources to mobilize and take action.

Thank you for helping and for sharing with others!
By Lisa|2021-12-17T07:51:47-08:00December 17th, 2021|california, regulations, residential, solar, Uncategorized|Comments Off on California Solar Needs Your Help Now

About the Author: Lisa